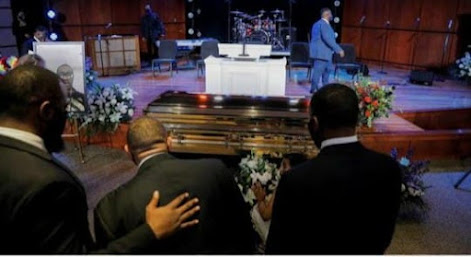 Memorial service for George Floyd set for late Thursday after days of protest, rage across the U.S.
Minneapolis was set to hold an emotionally charged memorial service on Thursday for George Floyd, the African-American man whose death in police custody set off a wave of protests and unrest that has roiled America in the midst of the COVID-19 pandemic and a divisive presidential election campaign.
The Reverend Al Sharpton, a television political commentator and civil rights activist who will give a eulogy at the service, struck an optimistic tone on Thursday morning, praising the unity of marchers protesting at police brutality.
“I’ve seen more Americans of different races and of different ages, standing up together, marching together, raising their voices together,” he told MSNBC. “We are at a turning point here,” Mr. Sharpton said ahead of the event.
George Floyd, 46, died after a white policeman pinned his neck under the officer’s knee for nearly nine minutes in Minneapolis on May 25, propelling the issue of racial justice to the top of the political agenda five months before the presidential election on Nov. 3.
Prosecutors on Wednesday levelled new criminal charges against four Minneapolis policemen implicated in Floyd’s death.
Derek Chauvin, 44, earlier arrested on charges of third-degree murder and manslaughter, was also charged with second-degree murder.
The added charge can carry a sentence of up to 40 years, 15 years longer than the maximum sentence for third-degree murder.
Chauvin was the white officer seen in video footage kneeling on Floyd’s neck as Floyd gasped for air and repeatedly groaned, ”Please, I can’t breathe.”
Meanwhile, huge crowds have defied curfews and taken to the streets of cities across the country for nine nights in sometimes violent protests that prompted President Donald Trump to threaten to send in the military.
The chairman of the Joint Chiefs of Staff, Army General Mark Milley, issued a message reminding the armed forces of their oath to uphold the Constitution, which gives Americans the right to “freedom of speech and peaceful assembly.”
Similar messages were delivered by other military leaders.
Officer stabbed
Thousands of demonstrators massed near the White House lit up their cellphone flashlights and sang along to the 1970s soul tune “Lean on Me,” before resuming a chorus of anti-police chants.
Several major cities scaled back or lifted curfews imposed for the past few days. In New York City’s Brooklyn borough, police in riot gear charged into a crowd of about 1,000 protesters defying a local curfew, albeit peacefully, near an outdoor plaza, and clubbed demonstrators and journalists as they scurried for cover in heavy rain.
A man armed with a knife stabbed and wounded a Brooklyn policeman in the neck and two officers who ran to his rescue were wounded before they shot the attacker multiple times, police said. All four were taken to the hospital.
The confrontations in Brooklyn appeared to be the biggest exception to a calmer night, hours after the new charges in were brought in Minneapolis.
Floyd tested positive for the COVID-19, his autopsy showed, but the infection was not listed as a factor in his death. The official cause of death, according to the full report made public on Wednesday by the Hennepin County Medical Examiner’s Office, was cardiopulmonary arrest while Floyd was being restrained by police. The manner of death was listed as homicide.
Post Views: 159